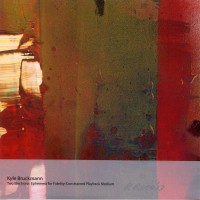 Way back in 2006, I was just beginning to get my home recording act together. These pieces were among the first things I completed, and have been stranded ever since – in part because they’re unusually harsh outliers, but also because I’ve always felt they worked best as a stand-alone pairing. I also hear them as oddly stuck in time, channeling a panicked late-Bush era Zeitgeist (the aetheric intrusions transmitted through my Z-vex pedal are, if I’m not mistaken, the ravings of a radio shock jock regarding Fidel Castro’s stepping down). Just as I was ready to give up on them ever seeing the light of day, enter the very sporadic label-of-love Greengage Sounds. What could be more absurd than releasing them now? Well, how about releasing 30 of them on unstable, sonically compromised lathe-cut vinyl?? With three different art-print covers courtesy of TX analog drone pioneer Rick Reed? Collector-bait alert!

Get yours here. A rather significantly high playback volume is recommended.