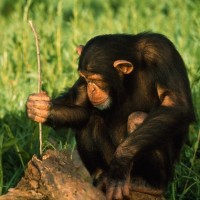 “Blindfold on, gun to head, I would put Technological Music, Vol. I squarely in the lineage of ‘live electronic music’. It’s got the flickering, asymmetrical pulses and the pungent, acidic timbres eating through the mix. It’s got the feel of organically developing systems that David Tudor explored with his neural networks. It’s got the jerry-rigged electronics and intuitive drive of David Behrman’s compositions. It’s got noise-drenched forms of Keith Fullerton Whitman’s forays into live modular synthesis. Even the track titles give off the metallic whiff of the experiment: Motion Study, Four Investigations of a Dubious Premise, Pulse Matrix, Knobs.

Except there’s not much ‘live’ on Technological Music and there is less ‘electronic’ than you think. Much of the record is actually sourced from Kyle Bruckmann’s oboe and English horn. Sure, he adds in some analogue synthesis, a malfunctioning electric organ and a piano. But how he got from these ingredients to the shuddering, sludgy low end and zombie drum-machine beats of Four Investigations of a Dubious Premise IV, a piece that is closer to some creeping, early-1980s industrial crawl or Wolf Eyes circa Burned Mind, is a bit of a mystery. Especially when he doesn’t actually use a drum machine anywhere on the record.

So if we read Technological Music as impressive mimicry or as high-level homage, either way we have to stop and ask: What’s the point? Haven’t we already hashed out this debate? We know acoustic instruments can sound like electronic ones and vice-versa. We know our ear plays tricks on us and that shrewd musicians can exploit those illusions.

The irony of the title Technological Music, Vol. I suggests Bruckmann might be making some kind of a comment on technological fetishism. On one level it might well be that, but considering that Bruckmann has deeply mined analogue electronics on other projects, particularly in EKG, his duo with Ernst Karel, much more than simple contempt drives this release. Contempt, as an organizing musical concept, isn’t all that interesting, anyway.

No, Bruckmann’s achievement is more than a stunt. It’s not just a love letter or a piss-take. He’s telling us to make creative use of our resources, whatever they happen to be, encouraging us to work against our limits. Bruckmann himself has plenty of instrumental technique and compositional chops, so his capacity is much larger than most, but the message remains: Don’t do the obvious. Make up down and down up. Challenge people’s perceptions. Technology is old as well as new, but it’s never about the technology, new or old, anyway — it’s about what you do with it. That’s been said before, but it’s worth saying again.”