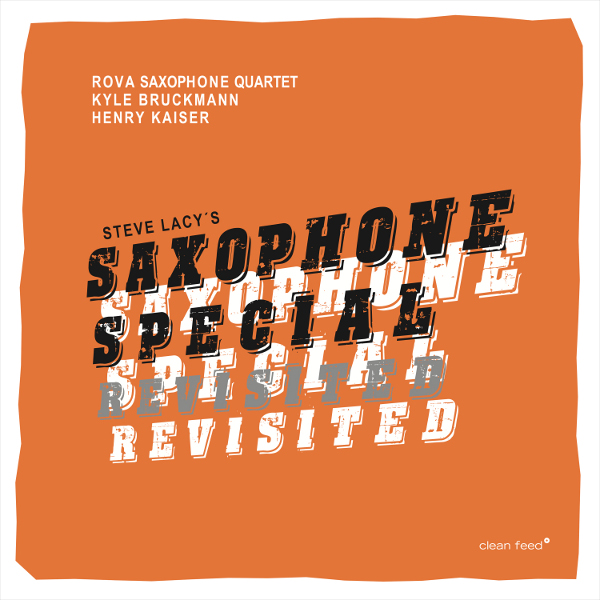 This is not the first time we hear ROVA – the Californian saxophone quartet composed of Bruce Ackley, Steve Adams, Larry Ochs and Jon Raskin – picking up a jazz icon’s music and turning it radically into their own. It happened a few years ago with John Coltrane and “Electric Ascension”. This time, Steve Lacy and his “Saxophone Special” album are the subjects of the musical reinvention, giving a new life to the late maverick soprano saxophonist and his very personal concepts. In “Saxophone Special Revisited”, Rova joins forces with guitarist Henry Kaiser and modular electronics ace, Kyle Bruckmann. These players are precisely in-line with the first “Saxophone Special”: Lacy included Michel Waiswisz’s synths and Derek Bailey’s electric guitar in the original proceedings, and this means that the present “revisitation” is closer to the Lacy’s original project with Steve Potts, Evan Parker and Trevor Watts than “Electric Ascension” was to Coltrane’s original “Ascension”. Here is a tribute to the revolutionary ideas put to practice by Steve Lacy, in a period – beginning of the Seventies – when the saxophone quartet was a practically nonexistent format in Creative Music – one track on Anthony Braxton’s “New York, Fall 1974” was the only concurrent example, and the World Saxophone Quartet appeared a year later. This new release is also the renewal of an old recording/performing partnership between ROVA and Kaiser which began with “Cinema Rovate” and “Daredevils” 40 years ago. It is guaranteed to surprise, illuminate, and delight today’s listeners.